Post-traumatic stress disorder (PTSD) is a chronic anxiety disorder caused by seeing or experiencing traumatic events that are exceptionally threatening or catastrophic nature, and likely to cause pervasive distress in almost anyone. PTSD does not, therefore, develop following those upsetting situations that are described as 'traumatic' in everyday language, for example, divorce, loss of job, or failing an exam. The symptoms of PTSD include re-experiencing the event through flashbacks or nightmares, avoidance of stimuli which remind the victim of the traumatic event, and increased arousal, such as anxiety, anger or hypervigilance. A formal diagnosis of PTSD requires these symptoms to persist for at least a month and to cause significant disruption in one’s personal and/or professional life. The person with PTSD has clinically significant distress and/or functional impairment. PTSD is a disorder that can affect people of all ages. Around 25–30% of people experiencing a traumatic event may go on to develop PTSD.

Post-traumatic stress disorder (PTSD) develops following a stressful event or situation of an exceptionally threatening or catastrophic nature, which is likely to cause pervasive distress in almost anyone. PTSD does not develop following those upsetting situations that are described as ‘traumatic’ in everyday language, for example, divorce, loss of job, or failing an exam. PTSD is a disorder that can affect people of all ages. Around 25–30% of people experiencing a traumatic event may go on to develop PTSD. The most characteristic symptom of PTSD is re-experiencing symptoms. Stellate ganglion block is an innovative management option for PTSD. Although stellate ganglion block’s precise mechanism of action in PTSD remains elusive, a growing number of case reports and case series have been published on its use for treatment-refractory cases of PTSD. However there is lack of randomised controlled trials and further research is needed to know which patients would benefit from this treatment, how many injections are needed and whether bilateral injections should be performed?

The earliest description of PTSD in the modern era was from the Civil War (1861–1865): ‘‘irritable heart’’ or ‘‘soldiers’ heart’’ (Da Costa, 1871). According to a paper published in 1876 by Mendez DaCosta, MD, Civil War combat veterans with ‘‘soldiers’ heart’’ had startle responses, hyper-vigilance, and heart arrhythmia, thus the first modern description of PTSD had a physiologic description. Current term PTSD was introduced in the 1980s in the United States and Western Europe. In DSM-III, multiple terms were applied to what is now called PTSD, many of which allude to a stress reaction and the biological effects on the heart, and presumably, the brain.

Individuals responding to a traumatic event may develop PTSD. This involves having experienced, witnessed, or been confronted with an event or events involving actual or threatened death or serious injury, or a threat to the physical integrity of self or others. Moreover, their response must have involved intense fear, helplessness, or horror. Symptoms can develop within weeks but according to the 10th Revision of the International Statistical Classification of Diseases and Related Health Problems (ICD-10) (WHO 2010) onset is almost always within six months. It may take months or even years for individuals to present to services. Delayed presentation is common but there is also some evidence that PTSD may have a delayed onset (Andrews et al. 2007).

According to DSM-IV (APA 1994) the symptoms are grouped into three clusters:

For a diagnosis of PTSD, symptoms must have been evident for more than one month and must cause clinically significant distress or impairment in social, occupational, or other important areas of functioning.

The PTSD Checklist (PCL) is a 17-item self-report measure reflecting DSM-IV symptoms of PTSD (Blanchard et al. 1996). The PCL has a variety of clinical and research purposes, including:

The PCL-C (civilian) asks about symptoms in relation to generic “stressful experiences” and can be used with any population. This version simplifies assessment based on multiple traumas because symptoms are not attributed to a specific event. The response options are: not at all (scored 1), a little bit (2), moderately (3), quite a bit (4), and extremely (5). A total symptom severity score (range = 17–85) can be obtained by summing the scores from each of the 17 items listed below. There are a number of ways of scoring the PCL.

A positive screen may be defined as a score of 50 or more, together with endorsement of the DSM-IV criteria, identified as positive responses to at least one B item (questions 1–5 on re-experiencing symptoms), three C items (questions 6–12 on avoidance and numbing), and two D items (questions 13–17 on hyperarousal symptoms).

Below is a list of problems and complaints that individuals sometimes have in response to stressful life experiences. Please read each one carefully, and indicate how much you have been bothered by that problem in the last month:

Primarily indicated to address mood disorders, the SSRIs increase the amount of serotonin circulating in the brain but they have been shown to be helpful in mediating PTSD symptoms. However, side effects include sexual dysfunction (Balon, 2006), somnolence (Giner et al., 2005), and an increased risk for suicide (Giner et al., 2005). Four SSRIs have undergone clinical trials for efficacy in treating PTSD; these include citalopram, fluoxetine, paroxetine, and sertraline.

The CBT component of treatment helps the client change how he or she thinks about the traumatic event and the response to that event. Using exposure therapy, the client is reintroduced to portions of the traumatic event in a controlled, safe environment. The typical CBT course is three months with one to two visits per week. Alternatives with potentially similar efficacy include eye movement desensitization and reprocessing (EMDR).

SYMPATHETIC NERVOUS SYSTEM (SNS): ITS ROLE IN THE DEVELOPMENT AND MAINTENANCE OF PTSD

The sympathetic nervous system (SNS) is part of the autonomic nervous system. Its role is to mobilize body’s resources under stress, to induce the fight-or-flight response. It is also constantly active at a basal level in order to maintain homeostasis. In PTSD, the SNS is known to be chronically activated over the normal baseline levels (Lemieux and Coe 1995; Krystal et al., 1989). In large part, the activation of the SNS is accomplished by the increase of catecholamines, mainly epinephrine and norepinephrine. The role of norepinephrine in the brain is that of a neurotransmitter leading to arousal, selective attention, and vigilance which has been demonstrated in preclinical studies (Southwick et al., 1999). Specifically, elevated urinary norepinephrine has been identified among patients with PTSD (Mason et al., 1988). Similarly, norepinephrine concentrations in cerebrospinal fluid (CSF) are significantly higher in subjects with PTSD than among healthy controls and have been correlated with the severity of PTSD symptoms (Geracioti et al., 2001). Such notable increases in noradrenergic activity among subjects with PTSD suggest that reducing CNS noradrenergic activity could be effective, especially for arousal symptoms such as nightmares and startle reactions (Taylor et al., 2006). Orally active noradrenergic blocking or deactivating agents that have been used to moderate an over-active SNS include clonidine and prazosin. 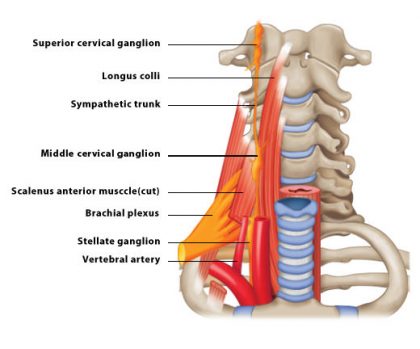 The stellate ganglion block (SGB) is an anesthetic injection in a group of nerves in the neck, called the stellate ganglion. The procedure has been used to treat chronic pain since 1925 and recent pilot studies have demonstrated great promise as a successful intervention for PTSD, among other indications. The first documented use of SGB for psychiatric effect was its use in the resolution of depression by bilateral SGB as noted by clinicians at the Cleveland Clinic in 1947 (Karnosh and Gardner, 1947).

The first case study of successful use of the SGB to treat PTSD was reported in 2008 (Lipov et al., 2008). The patient was a civilian and victim of a violent crime who experienced an excellent response to SGB with marked resolution of PTSD symptoms. This was followed by a publication by Dr. Sean Mulvaney and his team at Walter Reed Army Medical Center, where a significant resolution of PTSD symptoms in two Operation Iraqi Freedom veterans was reported over one year (Mulvaney et al., 2010)

Mechanism of action for SGB in PTSD

The best understood member of the neurotropic family, nerve growth factor (NGF) regulates a variety of signaling events such as cell differentiation and survival, growth cessation, and apoptosis (death) of neurons (Snider, 1994). The body responds to chronic stress by increasing NGF levels (Smith, 1996) and NGF is also known to be elevated immediately prior to soldiers’ first parachute jump (Alleva et al., 1996) thus demonstrating a connection between NGF, stress and possibly PTSD. Further studies have demonstrated intracerebral NGF increase leading to retrograde transport of NGF from the intracerebral site to the stellate ganglion (Johnson et al., 1987). Next, NGF concentration increase at the stellate ganglion has been shown to lead to sprouting (new nerve growth) at the sympathetic end terminals which is NGF dependent (Chen et al., 2001), which, in turn, causes increased norepinephrine (NE) levels. More evidence points to NE being involved in PTSD where urine levels of NE are known to increase in PTSD (Kosten et al., 1987). Thus, it appears that trauma triggers a neurobiological cascade that ultimately leads to PTSD. The reversal of this cascade possibly occurs following application of a local anesthetic to the stellate ganglion due to a reduction of NGF that is essential for maintenance of sprouting, since sprouting is NGF dependent(Takatori et al., 2006). This NGF decrease leads to the death of new nerve shoots (Gatzinsky et al., 2004).

Have a question about Post Traumatic Stress Disorder (PTSD)?
Or would like to book in with us?